After our camping trip – and a day recovering at base – we have spent the last few days taking day trips to sites surrounding Zackenberg. One of these locations was Lindemans valley, around 5 hours walk to the north of Zackenberg. We had seen some prominent glacial features here and wanted to go and investigate. Unlike the other valleys, which are made of volcanic rocks,  Lindemans is made of sandstone which has been very heavily cut into or ‘incised’ by the river, and it is now a deep gorge. The soft sandstone rock makes it very susceptible to weathering and the valley is lined by large debris fans and scree slopes which made for a lot of scrambling over boulders. We had a very interesting walk down the valley mapping some of the river and glacial deposits, and discussing the potential glacial history. We also sat down to have our lunch on one of the big scree slopes while overlooking the meltwater stream.

The well-stocked kitchen in the trapping station.

The Zackenberg trapping station we stayed in

We have also visited a large bedrock outcrop in Tyrolerfjord, west of Zackenberg, so that we could collect some rock samples for cosmogenic nuclide dating. This involved a three hour walk down the scree-covered fjordside via a small ‘trapping station’ – these are old cabins which were once used by Danish ‘Trappers’ who operated from around 1908-1960 collecting skins of foxes and bears and selling them in Europe. While working, the trappers would spend their winters staying in these cabins. Sirius, the special Danish patrol, also uses the huts when on their way through the area from their base at Daneborg – which is only around 30 km along the fjord from Zackenberg.  The team at Zackenberg is lucky enough to have one of these cabins only a very short distance away, and many of the researchers spend their days off staying there and going fishing in the small coves nearby. 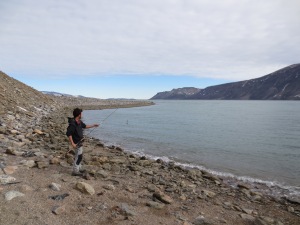 The Zackenberg trapping station was built in around 1945, and is well equipped with a bunk bed, stove, table, and a small garage. The field site that we wanted to visit was located only a few hours’ walk away, making the trapping station a perfect location to stay in after a day in the field! Jannik, the scientific leader at Zackenberg, kindly gave us some of his fishing lures so that we could try our hand at fishing once we had finished our sampling. We had a great time staying at the hut! It was nice to learn more about the very rich history of this part of Greenland.

We leave Zackenberg in only two days, and it is now time to start preparing our samples ready for transportation. The sediments (sands, silts, clays etc) have all been air drying in the lab at Zackenberg. This ensures that any excess moisture has evaporated so that the samples do not weigh too much in our luggage – the twin otter is only small! 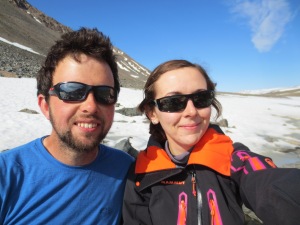