Hello again from the Kevo Subarctic Research Station. We are reaching the end of our field work, but before we are wrapping up, I will give you an update on the past 1.5 weeks.

After the planting of experiment 1 we also removed the cameras at our first cafeteria experiment. The big question was of course, will there be any voles? Yes, we captured a vole and also a bird and a female of another curious species, a human. Apparently our research site was also accessible for hikers. It must have been strange to find poles with ribbon, sticks with coloured tape and cameras in a palsa mire landscape. At this site we did not had a research sign yet, so it is not surprising that the lady was curious enough to take photographs of our experiment. Perhaps not knowing that by doing that she was captured herself by our cameras.

Two days later we went to Pulmankijarvi-jaggi to set up the second cafeteria experiment. This was quite exciting as we had to search a new area of palsas and pounu of which we knew it existed but we did not know if it was a good site for our research. Finding the area was actually not hard at all, it was only 5 minutes walking from the road. The area seemed to contain enough pounu for our research so we started to set up the second cafeteria experiment.  Again we selected 15 pounu with and 15 pounu without permafrost. Hereafter we made the plots and we brought the camera traps in position. 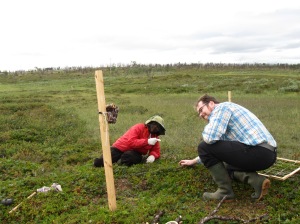 The next day we went back to plant the seedlings and to sow the seeds. This day appeared to be a reindeer day as we saw reindeer many times on our way to the site and near the site throughout the entire day. Although the reindeer at our site were the same reindeer every time, it was interesting as the other days at Pulmankijarvi-jaggi we did not see the reindeer that often. Our plots were further apart from each other than in the first cafeteria experiment, so at a certain moment we were hoping that the reindeer were not eating our seedlings that were left at the first pounu. Luckily everything went well and after all the cameras were turned on, all our experiments were running! Of course we celebrated this with some ice cream in the evening.

For the next part of our research we needed to sample leaves of 22 tree species and measure their diameter at breast height in the arboretum experiment of the Kevo station to assess epigenetic variation between the collection sites. However, after studying the ‘maps’, pieces of paper with row numbers and codes, we found out that we could only do 10 to 12 species. Of some species not enough trees were planted and other species were not planted in all of the three arboreta. As we could only collect leaves of 10 species on our first day, we had to go with leaves of just 10 species.

Rows of Pinus and Betula trees

The arboreta research is a project which will be done in collaboration with another professor at our university. As this is my project I was excited to start with it. It was quite a puzzle to find the species, or actually the rows where the species should be. Luckily we had some help of Mara, an intern at the Kevo Subarctic Research Station. She taught us how to read the maps and to find the rows. After two species we had to find out the other species ourselves, but I really liked the ‘quest’ for the species, probably because I enjoy making puzzles.

The three arboreta differ quite a lot between each other. The first arboretum was on a steeper slope and had more trees surrounding the site than the other two arboreta. The second arboretum had a greener understory than the other arboreta and was a bit more chaotic than the first arboreta. The third arboreta, however, was by far the most chaotic. When you opened the gate, you could not see the rows of trees. You first had to walk between birches and a lot of moss before you saw them. Then after 36 rows, the rows are suddenly from fence to fence and the codes are different from row 56 onwards. So as you can imagine, we spent a lot of time searching for the right species here. An additional interesting phenomenon was the ants within this arboretum. There were a lot of ants, which made some kind of high ways through the moss and had built gigantic ant hills. I found this very interesting and I could spend an entire day watching them, if we had the time. 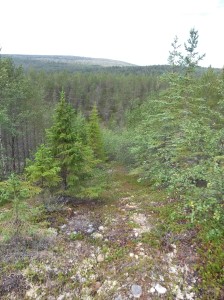 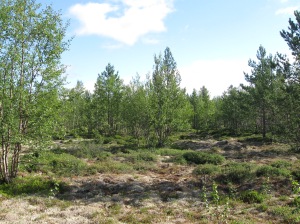 Now we have finished our arboreta research and we have only 6 days left to collect our second cafeteria, to set traps and collect them, and to check the emergence of the seeds and the status of the seedlings in experiment 1. A lot to do in a short amount of time in this beautiful country. I’m definitely going to enjoy every second of our time left here.

Thanks again for visiting this blog!