Team GLARE is now back, safe and sound in Leeds, sans dodgy field facial hair. From the comfort of an office where crampons are not required, the terrain is less hard on the knees and afternoon convective thunderstorms are less frequent, we can reflect on some hard – but successful – work.

After their brief Hintermission at the Hochjoch Hospice, Josh and Tom returned to the ice for another 11 days in the field. In a Herculean effort, hiking a 35 km round-trip, our colleagues from Innsbruck (and morale officer, Mika the dog) resupplied us with some much-needed potatoes and pumpernickel, and petrol for the generator they had also carried up. The generator was used to recharge the batteries for a dGPS base station, essential for precisely georeferencing our surveys, so the care-package was most welcome!

In their remaining time, Josh and Tom surveyed and re-surveyed, then surveyed some more, reaching a grand total of 69 surveys of 16 plots on different surfaces, with most plots surveyed four or five times each. In addition, four surveys were completed of the area around the stationary mast, which logged (nearly) continuously for the duration of the campaign, while the mobile mast was moved from its starting point to three subsequent sites for three or four days at a time, with a survey undertaken at each site. We managed to squeeze in a brief Hinterlude, taking a day off to ignore all of the sites and put our feet up. We even scraped together a cheese-board, bringing a Hinter-sophistication to the hut. 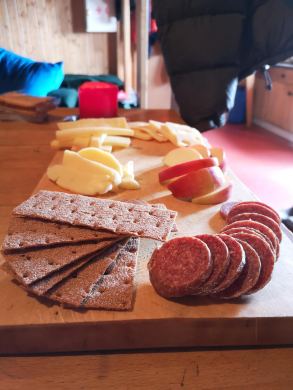 Importantly, the wind towers remained vertical and were able to provide a near-continuous set of observations of wind speed, direction, air temperature and relative humidity for the whole 15 days. Upon leaving, the reigns were handed over to the Innsbruck team who will tend their instruments and ours for another week or so, extending the dataset even further. Not only will the towers eventually provide us with some distributed z0 values for Hintereisferner, but they will also be used in studies of katabatic (glacier) winds by the Innsbruck team. These localised, density driven winds reach a maximum speed relatively near to the surface, exhibiting a logarithmic velocity profile from this maximum height to z0, where the speed is zero. As you can see in the clip below, the cup anemometer on the top of the mast is spinning a lot faster than the lowermost – an encouraging sign for our data!

While it will take a little time to process the microtopographic surveys and find out exactly how quickly the ice surface is changing, the glacier was definitely not afraid of showing a little dynamism while we were there, and the surface evolution was pronounced. This before and after shot shows a rock pedestal (the boulder is ~2 m along its longest axis) on the day the plot was first surveyed, and then again just three days later.

This made for some interesting terrain to survey and traverse, as rills and channels become more exaggerated, crevasses widened and snow plugs disappeared. By the time we left, we noticed huge differences in the nature of the surface compared to when we arrived. We’re looking forward to processing some of the data to try and quantify the changes we observed, and finding out what this means for the evolution of z0 across the glacier and through the melt season – we will provide updates with some initial, hopefully hinteresting, results in the coming weeks.