This afternoon, we arrived at Finse on the train from Bergen in glorious sunshine.  It is strange for me (Benny, that is) to come to Finse when there is snow and even in April there is still a great deal of snow – a couple of metres in most places.  I am used to a landscape of large boulders, numerous lakes and peat bogs.  This is all now covered in thick snow – the large lake next to Finse is frozen with many people kite skiing across it.

Our arrival at Finse, with a gloriously sunny view of Midtdlasbreen. And we’re not the only ones benefitting from the weather!

The winding track that I used to walk along from the train station to the research hut is now a quick, direct, two-minute ride on the back of a snow scooter.  We are the first team at the research centre since last autumn so the first thing we did upon arrival was to heat the place up and find two rooms that have daylight coming in through the window.  A majority of the building is still totally buried in snow right up and over the roof…

Midtdalsbreen fascinates me for several reasons.  I always think that if you want to find out what a glacier did in the past a good start is to dig some holes in front of it and look at the sediments.  Midtdalsbreen, like the neighbouring glaciers, has water at its bed.  However, back in 2010 when I first came to Midtdalsbreen, the sediments within the moraines  – ridges of earth in front of the glacier – suggested to me that a small part of the glacier was actually frozen to its bed.  I then looked at descriptions of the moraines from the 1960s but found that these moraines no longer existed and had been totally eroded away over the last 60 years.  The reason for this is probably because moraines and other landforms that are produced by a ‘frozen-bedded’ glacier are not preserved for very long.   Why is this significant?  Well, I would argue that it indicates that these frozen bed conditions were probably far more widespread in Norway and many other areas then we have previously thought – but the evidence of this in terms of landforms we can see is lacking.  Thus digging holes and looking at glacial dirt is important, and Midtdalsbreen is important because it gives us a glimpse into how variable a glacier can be and how this is expressed in the landscape around us.

Since the weather was so good we decided to head up to Midtdalsbreen this afternoon for a reccy.  In summer this trip would normally take 80 minutes on foot, but takes under 1o minutes with the snow scooter – this gives you an idea of the terrain under the snow! 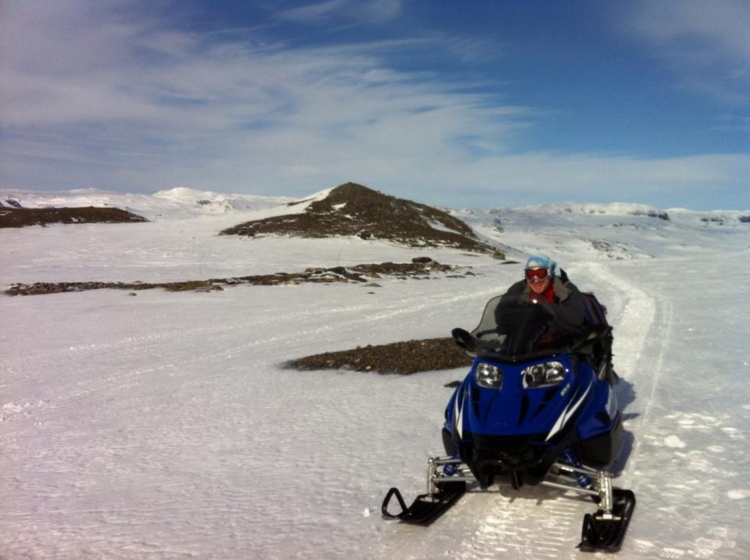 Adam at the helm of the snow scooter, headed to Midtdalsbreen.

Tomorrow we hope to get underway with our geophysical survey and I am sure Adam will have more to say about that in the next few days.

One thought on “First day at Finse Station”