After our last exploits in Blæsdalen we had two days back at Arctic Station to rest and recoup, as well as some last minute checks of the GPR gear.  This happened to coincide with the departure of one of the other groups staying here, from Copenhagen.  To celebrate their time here they invited everyone to what can only be described as a feast!  Following an amazing seafood soup to start (scallops, mussels, fish) we had roast Musk Ox (brought freshly from the mainland) with potatoes and vegetables, finished off with Angelica plant jelly.  It was a great way to say goodbye to some of the people we’d met during our stay, and definitely fuelled us for what was to come! 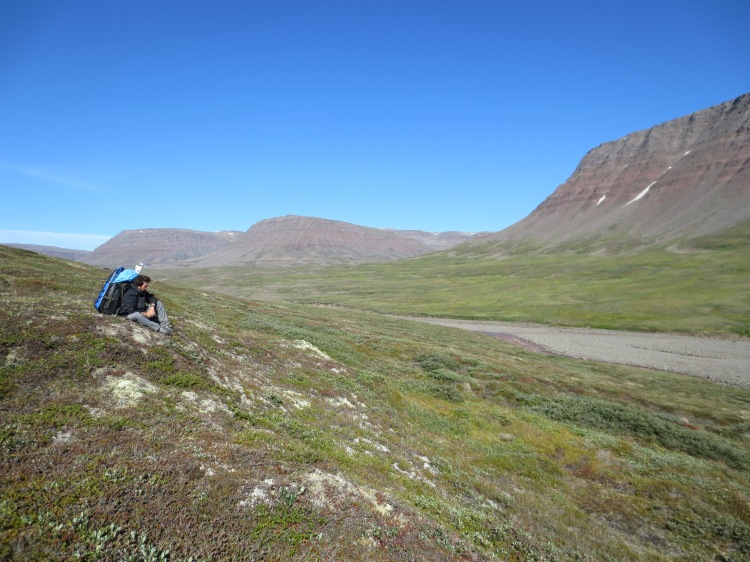 Sitting and contemplating in Blaesdalen

Our plan was to spend three days up at Chamberlain Glacier to finish off the measurements we needed from this field season.  With our tent already in place (see previous post) we only had to carry the GPR and some bottles for sampling meltwater.  Day 1 went well, and we reached our tent by 5pm, after an 8 hour walk, and having crossed several cold streams.  We unpacked and tucked into an early tea to prepare us for some late evening GPRing.  We got up to the part of the glacier foreland we wanted to study by 7pm, having crossed one of the largest moraines we’d ever seen – it even had its own lake (and possibly it‘s own website). We were camping on one of its flanks, so it also technically had its own settlement.  The size of this feature is a testament to the power of the glacier, and reminded us of the force of nature we were dealing with!  The GPR survey went very well, with Gertrude (the GPR) working better than ever!  Normally Gerty requires a good deal of care and attention to produce data, and can often misbehave. However, knowing how far we’d walked that day she decided to play ball!  From a preliminary look at the data as it appeared on the screen we could see that some definite structures were appearing below the surface, indicative of the active layer of permafrost.  This is what we’d wanted, and hopefully shows some contrast to our April visit, when everything was frozen.

View down the valley Chamberlain Glacier is in, with the peak of Blaesdalen in the background

After a ‘hop’ back over the moraine and down some steep scree slopes we got back to the tent for a comfortable few hours’ sleep.  Before we knew it 4.30am had come round and it was time to get back to the glacier!  This time we were carrying out hourly meltwater sampling from 6am – 6pm.  This is to help us characterise the sediment load the glacial stream is carrying, and to also see how it varies throughout the day.  Theoretically, there should be an increase in the amount of meltwater, and the amount of material (gravel, sand, silt, clay) the river can carry through the day, as warmth from the sun increases.  Despite being exciting science, the idea of sitting by a stream for 12 hours, taking samples every hour wasn’t as appealing.  However with the beautiful views on offer, short naps/bursts of supplementary sampling from the foreland, the day flew by!

After finishing the sampling, our work at the glacier was done, and it was time to begin our journey home.  Knowing that we had the rest of the evening and the next day to get our GPR and camping equipment back (4 large rucksacks worth between the 2 of us) we started shuttling equipment to that nights campsite – we had decided to pitch the tent just near the river crossing that we’d have to complete the following morning.  While Kathryn put the tent up Tim headed back to our final cache of equipment, marked by an orange Sainsbury’s bag for life on a prominent boulder up the valley.  Equipment collected, Tim made his way back to the camping spot, crossing a final stream just as low-level cloud rolled in, reducing visibility to about 2 metres!  Luckily through some old-fashioned navigation (and shouting “Kathryn” loudly) we were reunited and got some well-earned sleep before we began the final haul back to Arctic Station.

The last day of our expedition, though long, went surprisingly well!  After our final river crossing (several times to ferry the gear) and some threatening spots of rain, we made it back to Arctic Station.  Fuelled by a homemade mocha, our final Soreen of the trip, and some tinned mackerel on Ryvita we powered through, arriving back with all our equipment in tow by 5pm. This was gloriously early compared to our previous efforts, and we enjoyed an evening of recuperating with a nice big pot of coffee.

Today we have been catching up on some rest and collating our data. The GPR readings, on preliminary analysis, are showing up very nicely and there are some clear contrasts with the winter season recordings. Part of this afternoon has also been spent gathering our sediment samples and re-packing the crate, ready to ship back to the UK. As we are both walking like cowboys due to the large amounts of walking, Tim spared us the trip to the bakery to get him a cinnamon swirl by making his own! What a treat! Tomorrow is our last day at Arctic Station for this season. It has been a very successful field trip. We have met some great people within the other research groups, and had some very eventful excursions up to the glacier. Most importantly, we have managed to gain the data that we need to analyse the changes in the permafrost. Arctic Station, it has been a pleasure. Hopefully we will be back one day soon…