We have had a very exciting few days here on Disko while we prepare for our hike up to Chamberlain Gletscher. Yesterday the weather closed in and we were unable to make any major trips up Blaesdalen. The bright sunshine had given way to a thick, grey fog and drizzle. Great for keeping the mosquitos at bay, but generally quite miserable.  Instead of braving the long journey to our glacial foreland, we spent the time around Qeqertarsuaq investigating the bedrock. This provides us with important information on the glacial history of the area, and by looking at the form of the bedrock, and taking samples, we are hoping to build up a picture of the glacial activity here in the past. 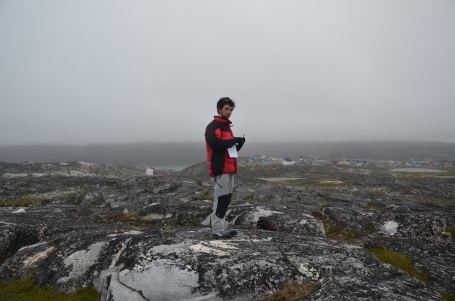 Tim hard at work in the fog

‘How does this fit in with the permafrost story?’ we hear you ask. Exploring the previous timing and extent of the ice provides us with a longer-term perspective on the ice-permafrost interactions. As well as assessing  these changes over the short-term (daily, weekly, monthly) it is also important, as Earth scientists, to consider how these short-term fluctuations sit within a much longer-term context. After spending the day completing some mapping on the bedrock outcrops close to Qeqertarsuaq, we retreated back to Arctic Station, quite cold and wet, to start making plans for our trip to Chamberlain. Seeing as we were so close to Pilersuisoq (the local supermarket where Tim works), we called in to stock up on some supplies – 10 apples, some sweets in the shape of the Greenland flag, and two cinnamon swirls. The final highlight of the day is that Kathryn was told by one of the biologists at the station said that she has a very enjoyable accent – there must be something in that mancunian charm somewhere along the line. 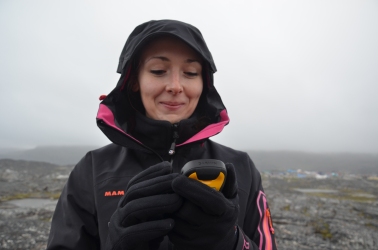 Kathryn using her charm on the GPS

Today has been a real bonus in terms of our schedule. A fellow INTERACT researcher here at AS, Mark Stevenson (of LAC-VEG fame) and field assistant Joe, were taking a boat trip over to a valley on the west of the ice cap and very kindly offered us a place to go with them. This gave us a fantastic opportunity to visit the periglacial landscape within another of the major valleys emanating from the Lyngmarksbraen. It also meant that we were able to take a boat ride around the icebergs in the bay. The morning commute was rather choppy, and Kathryn and Joe had to hang on tight at the bow of the boat to avoid falling out! It was all worth it, as we got some great views of the bergs up close. 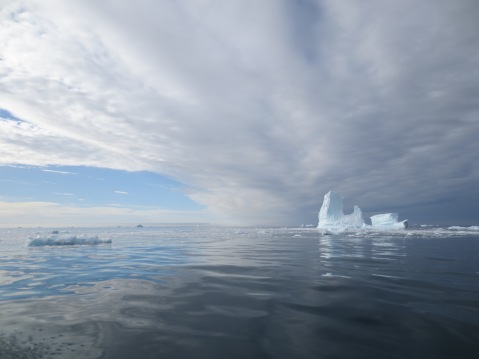 Icebergs on the commute – a better view than on the London Underground!

Akaar very kindly dropped us off at the beach, and was to collect us later that evening after both groups had completed their research for the day. As Mark and Joe headed off to sample one of the lakes, we started out on the long walk up the valley to complete some geomorph mapping. We have been analysing this valley from Google maps, and were keen to see some of the features first hand. The meltwater streams here was in full flow and we spent a few ours attempting to ford the river (it was full of deep pools, rapids and large boulders) to get to the other side of the valley. We eventually managed to find a safe place to cross the valley, and were rewarded with a beautiful braidplain. The flow was full of suspended load coming from the ice front further up valley. It was quite amazing to see so much material coming from the ice cap. After around 4 hours of trecking up the valley we had already managed to complete a good deal of mapping and take several samples of sediment and boulders. 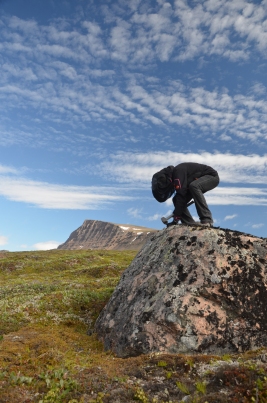 These are to be used to characterise the glacial activity in this valley, and to provide a comparison for our own valley, on the eastern side of Lyngmarksbraen. Sadly, we were unable to reach the head of the valley in time, and we had to head back. This would certainly be top of our list if we ever have the good fortune to return to Disko! By the time we were ready to make the evening commute the choppy waves had died down, and the skies were blue. Tim called in to the supermarket for another cinnamon swirl (I can see a theme emerging here…). A very productive day that has left us eager to get to Chamberlain and complete the final part of our GPR campaign! It’s going to be a busy few days making several journeys along the 20k round-trip, back and forth between Chamberlain and Arctic Station, transporting tents and equipment. That said – time to get packing! See you in a few days. 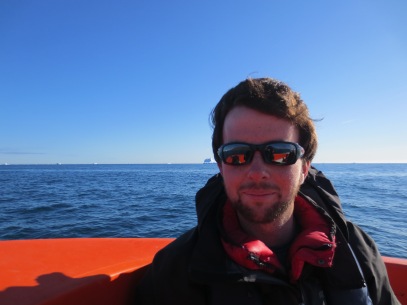 Tim on our way home 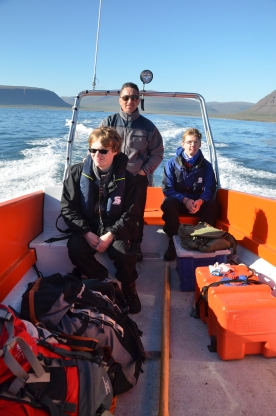