It is less than a week now before we arrive in Greenland to begin sediment coring on lakes at Disko Island in central west Greenland from our base, Arctic Station near Qeqertarsuaq.

After months of planning we are finally beginning to realise that very soon we will be embarking on a scientific expedition to a remote destination that few people have visited.

Our project aim is to collect sediment cores through the ice from two or three lakes on Disko Island to help reconstruct climate change in this region over a period known as the Holocene (~12,000 years).  We chose Disko Island for our study as it is located above the Arctic Circle, but during the summer months has significant vegetation that has changed over time with past climate change.  To our knowledge, few sediment cores from lakes have been taken from lakes on Disko Island.

With climate in the Arctic now warming rapidly, vegetation coverage is expected to be expanding in a northerly direction – a process often called ‘greening’.  But, it is not known what impact changes in vegetation may have on lakes and the storage of carbon in sediments.  Lakes can store carbon in sediments or release carbon dioxide to the atmosphere; however only by looking at past changes in climate will we be able to better understand under which conditions lakes stored or released carbon.

When catchment derived material enters lakes light can become limited, however it is unclear under which past climates this encouraged autotrophic production (carbon fixing by photosynthesis) or stimulated mixotrophic species (able to use carbon as a supplemental source of energy).  When we take our sediment cores back to the lab we intend to run pigment and lipid analyses in order to reconstruct the land and lake communities present over the past ~12,000 years.  Analysis of lipids are especially effective at distinguishing between land and lake source inputs, while pigment analyses have proven useful as they are excellent at inferring changes in aquatic biology.

Two weeks ago three coring boxes constructed at Nottingham University complete with a box of supplies (including sediment bags, packing materials and sample boxes) were sent by air freight to Arctic Station on Disko Island.  It is amazing to think that these packages may now be flying over the Norwegian or North Sea, the Greenland Ice Sheet or waiting in a storage facility in Kangerlussuaq before being loaded into a Dash 7 turboprop to Aasiaat prior to a 35 minute helicopter flight across Disko Bay to Qeqertarsuaq.  Form where they might be forwarded by dog sleigh or Ski-Doo to Arctic Station! Let’s hope the boxes are not stuck with the couriers in Coventry! 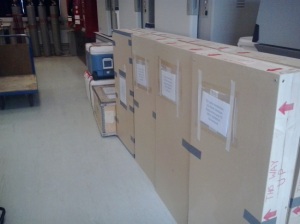 Some of the freight boxes sent by air freight to the Arctic Station in Qeqertarsuaq.

Mark and Suzanne will meet Peter Rasmussen at the GEUS on Sunday to pick up the Russian Corer and Ice Borer and then check these in as excess luggage.  Then later in the evening we will meet up with Erika and Emma and on Monday morning fly from Copenhagen to Kangerlussaq.  We will spend one day gathering supplies at the KISS (Kangerlussuaq Inernational Scientific Support) base in Kangerlussuaq before flying to Qeqertarsuaq via Aasiaat on Tuesday.  Our plan is to use the first day to unpack the field kit, pick up the freight and meet the guides to plan our route, followed by days visiting the nearby lakes for sediment coring, packing and getting them ready to be sent back to the UK in one piece!  We hope to keep the blog updated with our progress throughout our journey.