Work in Kobbefjord has been rather difficult for the past week since autumn along with the “normal” storms and rain has arrived. So we try to push our regular monitoring in between heavy rain and storm with gusts between 25 and 30 m/s. Yesterday was one of those “in-between-days” with perfect weather and snow covered peaks. Due to the rain the water level in the lakes and river systems have risen noticeably. It is nothing out of the ordinary – we are used to having this type of weather in the autumn. But it’s always a bit inconvenient when you know of all the work that still needs to be done.

View of the bridge crossing the river in Kobbefjord.

Though I have been complaining about the weather autumn also means fantastic coloration of the landscape. There is hardly anything more spectacular than witnessing the colors change during an Arctic autumn. The shrubs have starting wilting and making the slopes appear orange and red. Especially the red leaves of dwarf birch (Betula nana) stand out – and more so when the canvas is a sunny day with blue skies. 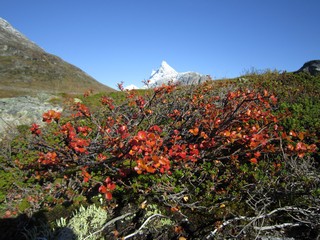 Dwarf birch in autumn colors with the Qassi peak in the background.

Today we had plans for bringing a class from the local upper secondary school to Kobbefjord to give them an idea of the monitoring work being carried out. But as the below photo shows the weather has turned really bad again… So instead of them coming to Kobbefjord to learn what scientists do to gain more knowledge on the effects of climate change they have been invited to come to Greenland Institute of Natural Resources instead. I will give them a lecture on what GINR and NuukBasic is all about and hopefully make some of the students interested in pursuing a future within the natural sciences.

View from the main entrance to GINR… Rain and heavy winds…

This is all for now. Next week I’ll be at an INTERACT station managers meeting in the Czech Republic.