For our second blog entry, we transition from cultural anecdotes (food, energy) to our actual research.  The food-scholarship connection is captured in the title phrase taken from “Sayings of the Fathers”. 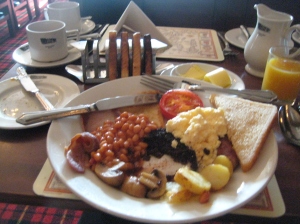 The Scots like their meat (with the exception of our vegetarian research assistant).  And bread.  And potatoes.  And beans.  That seems to be most of the diet.  Yes, I tried the black pudding (I only asked what it was after I ate it) and the haggis (Roy would not relent until I tried the haggis…). Overall the food was quite good, although a radical shift from our Mediterranean diet.  Fewer cheeses, fruits and vegetables. Thanks to Jan (first-rate tour operator in addition to her scientific skills), we ate well. Most of the places we ate specialized in local fare and many advertised that they purchase locally produced, organic, and free-range meats.  Leaving aside the growing pool of knowledge linking a meat-based diet to climate change, locally-grown products are the best way to go from an environmental perspective.  We were pleased about that.

The best meals were at Balliefurth Farm and at the Grant Arms Hotel (more on that Grant-on-Spey hotel later).  At Balliefurth, Ann and Alistair hosted us around their kitchen table and where we learned about the virtues of grass- over grain-fed cattle. More Omega-3, for starters, and of course a host of environmental advantages.  Admittedly, they were ‘preaching to the converted’ but it’s great to learn more straight from the source.

On the opposite end of the health spectrum, Jan also got me addicted to “tablets,” which are essentially powdered sugar and butter.  I had far too many and there are a couple in my suitcase as I head home.

And then there is the wonderful Cairngorm beer, brewed right in Aviemore.

The British minister responsible for energy policy is actually called the Minister of Energy and Climate Change.  Now that I check, this is true of a number of countries. This seems to me an extremely productive and logical step in looking at energy policy holistically.  Certainly an idea I can advocate at home.

While we were researching in Scotland, there was constant energy buzz – a member of our research team had just finished installing solar panels on her home, and one of our survey respondents had proudly announced the same.  The Scottish government was talking about a new electricity plant powered by tidal movement, and the debate around wind was whether it should be in the mountains or off-shore (that is, everyone was in favor, it was just a question of where).  These are encouraging signs, even though Great Britain remains largely dependent on gas, coal and nuclear energy.

This entire project is motivated (from my perspective) by the need to advance the state-of-the-art of social ecosystem assessments. Some questions from our research agenda: 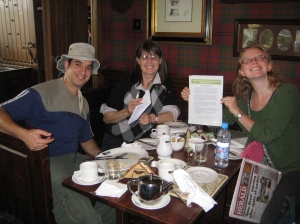 Food, then work: Our research team (Roy, Jan and Rachel) minutes before heading out to collect the first of 300+ surveys.

One thought on “Without Bread there is no Torah… Even in the Scottish Highlands.”